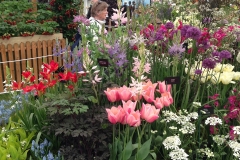 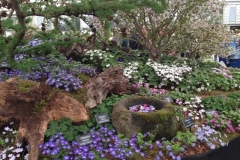 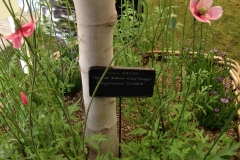 The weather for Chelsea 2016 was more benign and warmer than 2015. As always the show gardens were difficult to see with the usual large crowds. The Great Pavilion is the opportunity to hunt for the good and the new plants, and to marvel at the skills of the nursery men and women. Three plants caught our imagination.

The first show stopper was the Avon Bulbs stand. Another Alan Street and Chris Ireland-Jones triumph. The Camassia leichtlinii , Avon Bulbs Stella Hybrid, was the stand out plant (a Carol Klein must have cultivar). Surely Avon Bulbs was the one most likely to win the Diamond Jubilee Award for the best exhibition in the pavilion; then Alan pointed to John Massey’s stand.

John Massey, Ashwood Nursery, had produced an extraordinarily stunning display of Hepaticas. The stand designed with the help of Rupert Golby was a marvel of presentation of a huge range of species and hybrids. The effort of moving plants in and out of cold store to have them held back but ready for Chelsea was an amazing achievement. Whether such a display will be done again is open to question. So far we have failed to grow hepaticas successfully, maybe another try but in a different part of the garden.

The last of the three plants which really caught our eye was Papaver dubium subsp lecoquii. This delicate pink poppy was used in one of the large gardens but as is often the way a spare plant found its way as a decorative accompaniment to one of the educational stands. A couple of days later we tracked down the source of the plants and bought three that did not get used at Chelsea. We now have the seed as a reward. Some have been autumn sown others are being held back for spring sowing. With a bit of luck we have a pleasure in store in 2017.