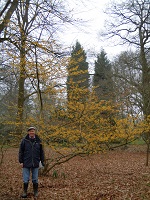 Chris Lane owns and runs “The Witch Hazel Nursery” a wholesale nursery in Kent and is the owner of one of the three National Collection  for these striking plants; so showy in February when not much else is at its peak. He also grows wisteria, flowering cherries, and much more, and is the author of the RHS guide to witch hazels. (www.witchhazelnursery.com)

Chris provided us with an informative evening suggesting a large number of good cultivars which was a bit overwhelming. He introduced himself and his career journey from working on his father’s nursery through college, lecturing to finally being caught by the Hamamelis bug. His opening remarks about the genus described some of its characteristics – flowers survive down to -180C, perfume is released when the temperature rises to 10 – 120C and the flowers and fruit are on the plant at the same time. Chris took us on a world trip starting with the Hamamelis from North America (H virginiana) down as far south as Mexico (H. vernalis), then over to the Far East to Japan (H. japonica) and China (H. mollis) back to Europe and the leading lights on the continent finishing in the UK (H. x intermedia ‘ Pallida’). Throughout Chris highlighted those cultivars he considered were some of the best finishing with his top ten, see the Gallery for some of his recommendations. In answer to questions on cultivation Chris emphasised the importance of good drainage in the winter and the requirement for damp in the summer. Plants can be pruned back to two buds after flowering to keep the plant compact. To propagate from seed sow in the Spring after collection, give them frost in the winter and germination will take place the next spring. The plant will take 3 years to flowering. Plants can be layered to be sure of the same cultivar.